It’s been a busy beginning of 2015 for us on all fronts, but what has proved particularly interesting is the amount of varied print design work we’ve completed (as well as our more regular diet of website design). It’s been quite an even balance between the two, amazingly.

The received wisdom from doom-foretelling anti-ink soothsayers is that over time we should be doing less and less layout design work and more digital. But instead we’ve completed (or nearly completed: we are finishing an exciting project for a new client right now) five major printed policy reports in the first few weeks of the year.

PRINT DESIGN: THEN AND NOW

But I don’t want to sound too daunted as working on a series of reports concurrently isn’t a new phenomenon. Back in the Autumn of 2013, our long-term client Policy Connect asked us to design a series of four major policy reports in three weeks, an undertaking I still look back on and wonder how on earth we managed (but we did). What marks this latest bout of work out as being unusual is the varied nature of the projects, and all for different clients.

I have long-felt that the policy recommendation-type report is one of the most under-considered yet important types of print work. I try and keep my eyes open to see who else is working in this field but while the reports themselves make big news, invariably these documents are finished so close to deadline that there’s no time to have given their layout serious consideration. This is a serious problem for reports which need to be read by opinion formers such as journalists and Parliamentarians, which frequently affect policy.

Which means, in turn, peoples’ lives.

That sounds dramatic, but considering we’ve designed reports on topics as far-reaching as…

– the rail freight industry as a lever for economic growth;

– the future of funding further education in the UK

– the changing structures of work in the UK and their impact on the HE system;

– the future of social design, and;

So I don’t think it’s an understatement.

After all, we’re ‘just’ designing the reports, not writing them, but I don’t want to undersell our impact, or a little more modestly, the result of considered layout work on a piece of policy writing. Overall, my feeling is that affecting the way an inquiry or report looks affects the way they are read, which in turn affects their impact. And a good cover always works. They certainly stand out in, shall we say, important surroundings… 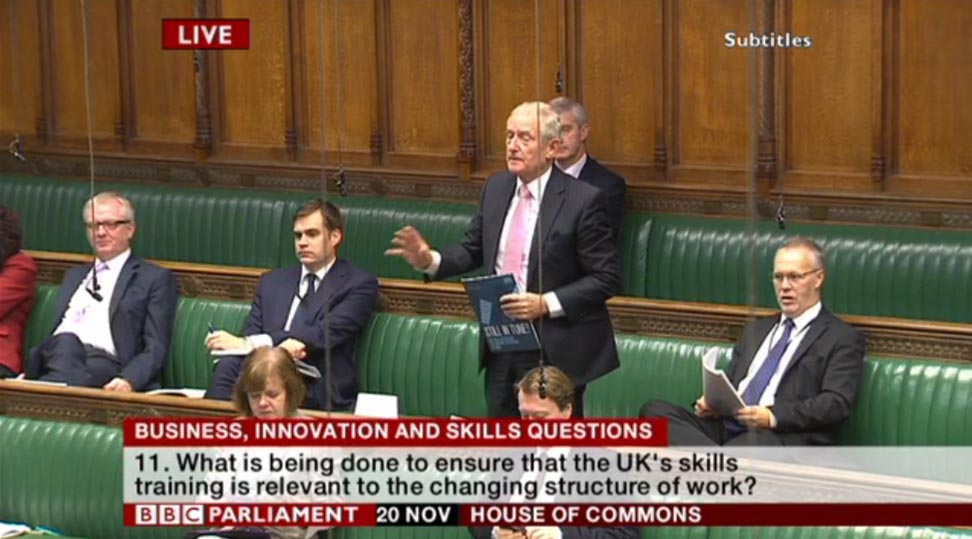 So all this work has kept us on our toes, put it that way.

The exciting part will be when the party manifesto publication season arrives and we begin to see how the reports we have been involved in have begun to seep into new policy promises.

Come to think of it, I think we’d love to work on the graphic design of a political party election manifesto. That would be a great job.

We’re here, if anyone is offering…!