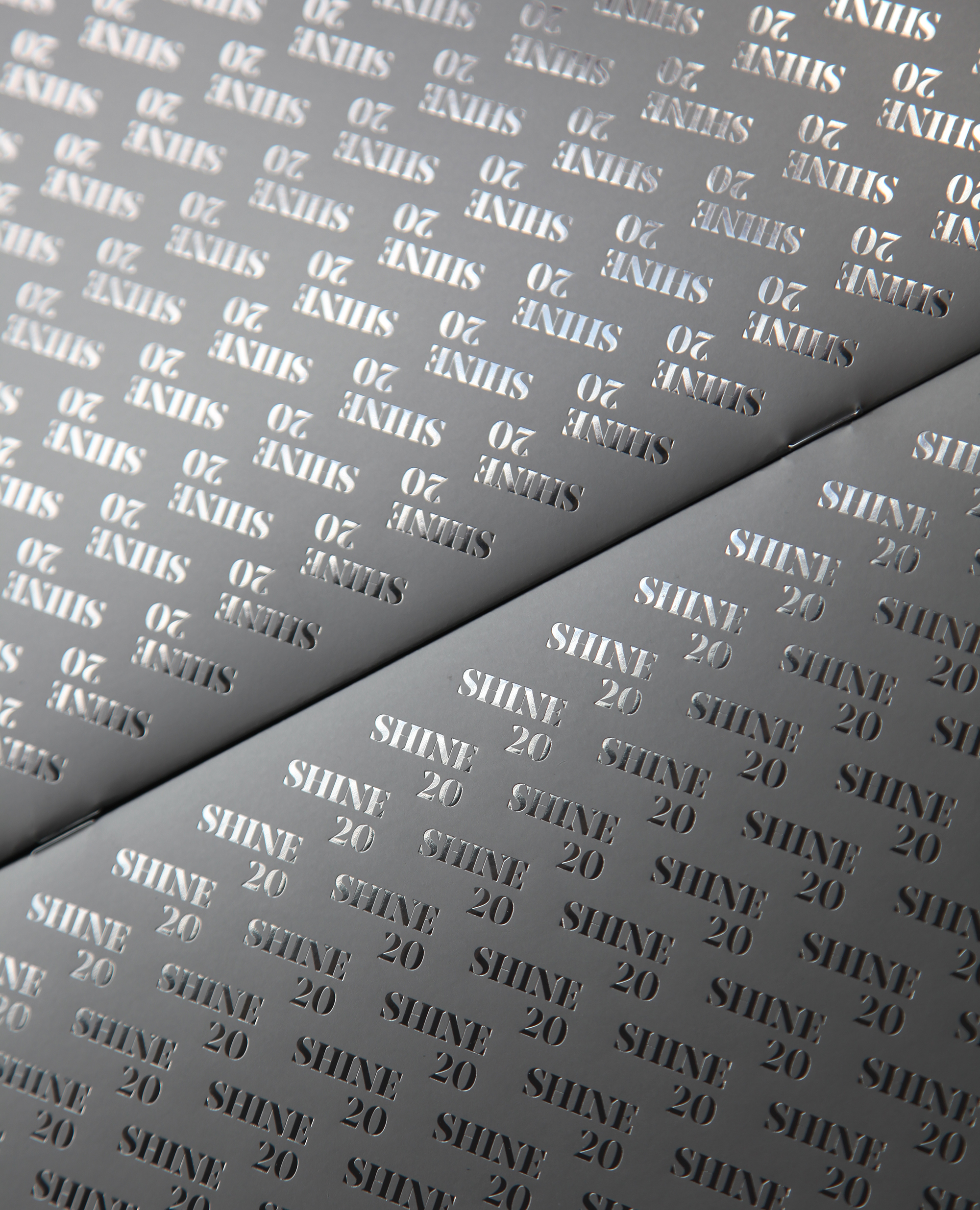 It’s been such a strange week, month, year, you name it, for all of us. Disorienting would be one word for it. Nothing has gone to plan but then, I was contemplating the other day, as an entrepreneur, does it ever? The best approach I’ve come up with is just to acknowledge (perhaps even enjoy) the present but aim for the future. Then, now and again, amid all this strangeness, comes along something really wonderful. We’ve received a print award nomination for the sixth year running at the industry’s Solutions Awards. The nomination covers our work over the years on our charity project The Shine School Media Awards. The news has delivered such a boost to us. At the end of a long, long year of work in the weirdest circumstances, here we are with a wonderful recognition and however things pan out at the (online) ceremony in November, achievement.

With so many in-person events this year being completely disrupted, the natural rhythm of our lives feel upended. However it’s been inspiring to see many familiar friends reimagine how to achieve their projects in 2020 and find a new approach. One such event is the print industry’s annual Solutions Awards. Held each November at the Café de Paris, it’s one of the year’s most fun occasions.

And it’s been incredibly rewarding. In the time that we have been involved with the awards programme and its parent company, Earth Island Publishing, our project work has scored an astonishing seven nominations and two wins. The trophies have pride of place here at the office. Given we’re a small team, I tend not to enter that many awards schemes – not out of false modesty but they just involve so much money and PR and social media. And… I have work to do!

But the Solutions Awards are different: the categories are so relevant to us. They reward creativity. And best of all, are voted on by the industry. So while a nomination is great, a win is really something special. Coming home last November with last year’s trophy was such a moment. 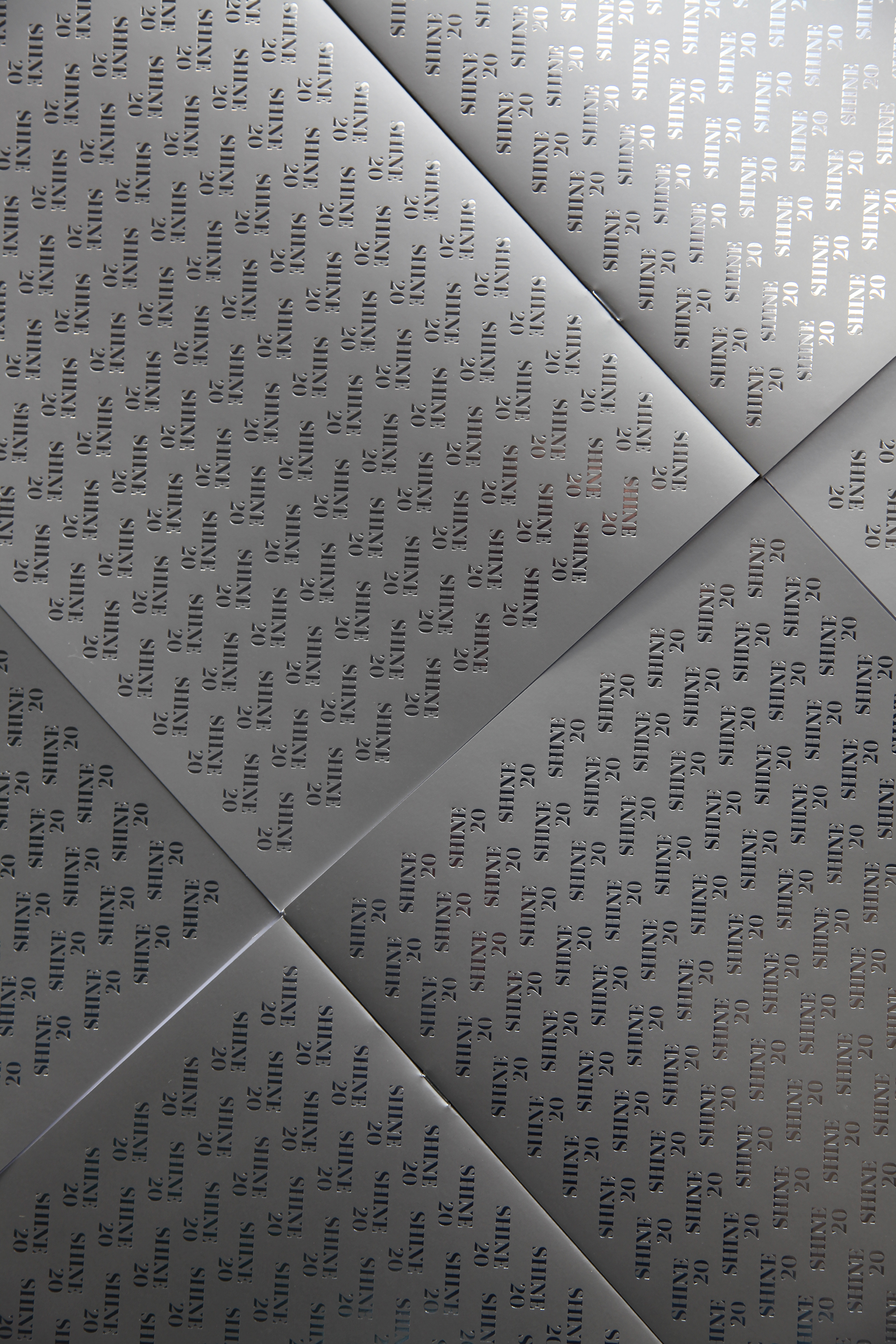 I’ve been involved with our charity client Shine School Media Awards for seven years. In that time it’s gone from altruistic job to passion. In those years I have often talked about it being one of the most creative and worthwhile endeavours of my life. Simple as that. Why so? Because we get to encourage young people to be creative and reward them for it – and at the same time complete a wonderful piece of print design celebrating the winners, for which we write the brief.

However 2020 was always going to be challenging. The very nature of an awards programme is after all, the event. Without it, without seeing people, offering them congratulations and handing over the trophy, could we even go ahead at all?

In fact, it turns out that you can do whatever you set your mind to in 2020. The thing is, you just have to invert what is possible. Think of it like a river working its way around rocks. To get where you want to be, this is a year of sheer grit. So, with a little imagination, we decided to go ahead and find a way of putting the awards online. Presenting alongside Alison, the Chair of Shine, we created both a new section of the website celebrating the winners and recorded an ‘online presentation’ that nominees could tune into, which we uploaded to Shine’s YouTube channel.

That decision and the amazingly uplifting response to it, have galvanised us for the year ahead. And then, at the end of the summer, having assumed that producing the winners brochure would be impossible, we agreed that was one presumption we needed to sweep away. 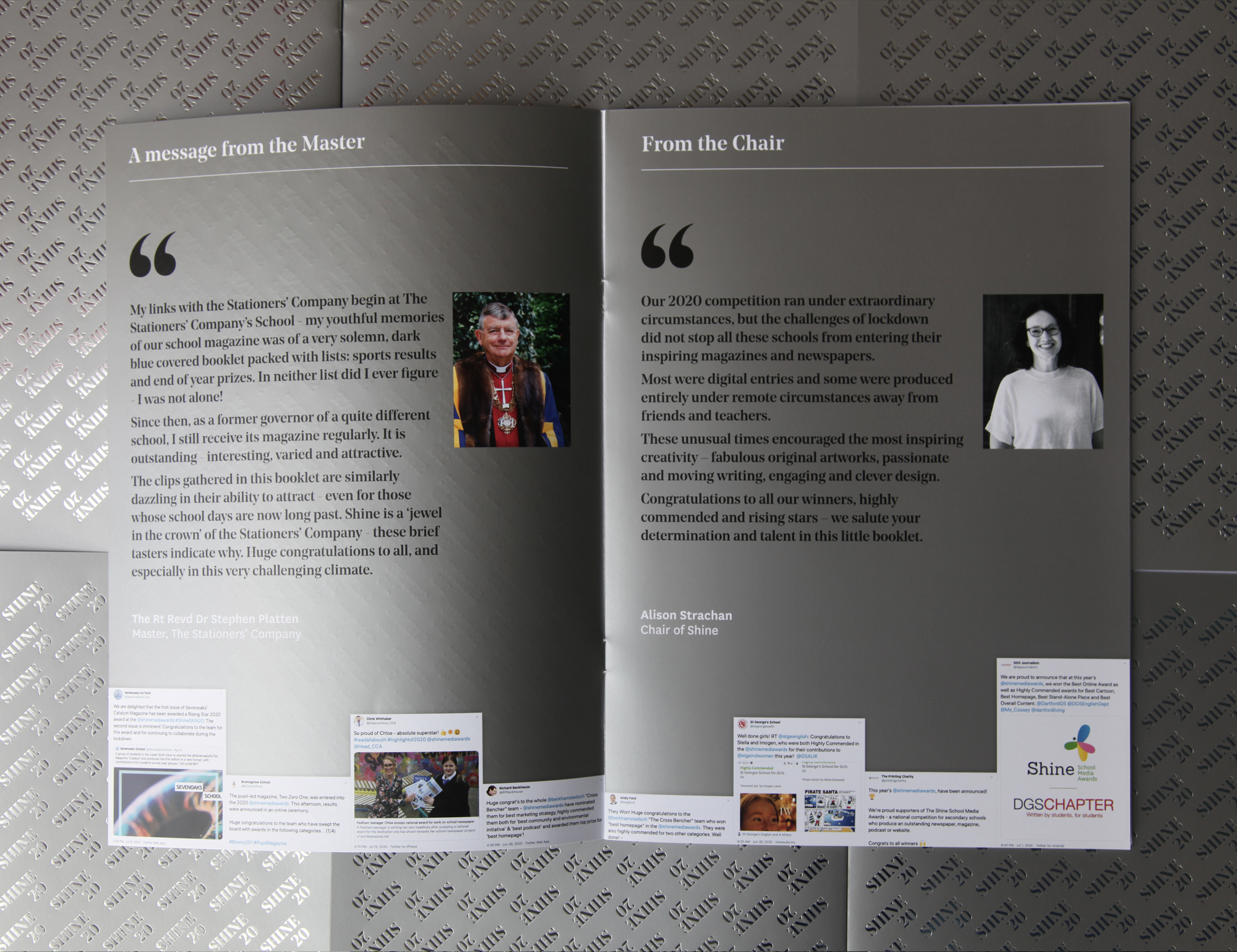 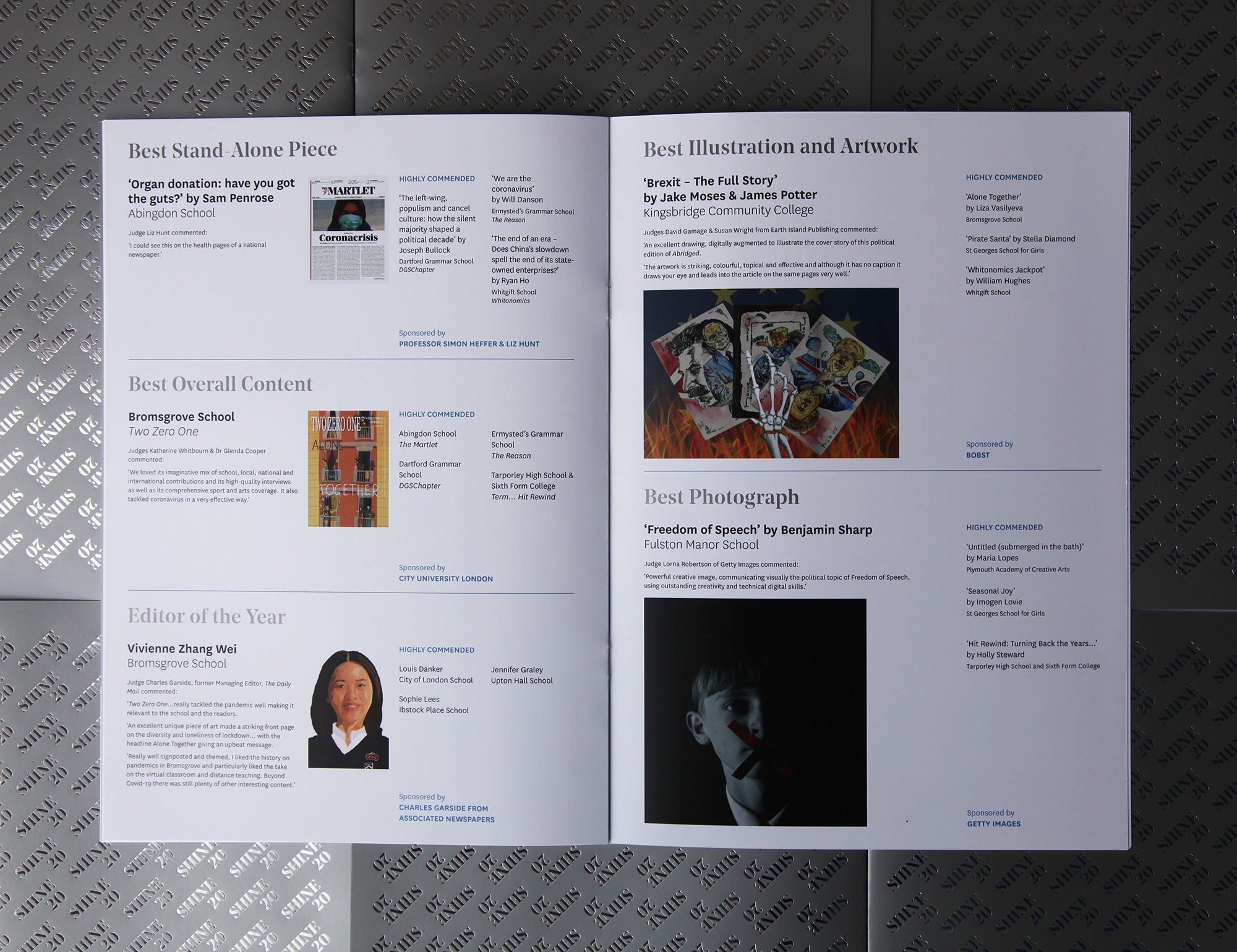 For me, designing the Shine winners book is such a highlight of any given year. It’s usually an endeavour I share around, seeing who could come up with the best ideas for the cover or overall theme. That way the end result feels fresh, different from what we did the year before and upends expectations.

The idea really is to come back with something really fun, that catches the eye and feels decisively of the moment.

Working with our long time partners at Denmaur Paper Media and PurePrint, we completed this year’s book at the end of the summer, allowing it a little more time than usual. The book is also shorter than previous books as we’d already announced our winners online. The idea here was to celebrate those who had created school projects against all the odds.

We had seen a deep metallic, gun-metal grey ink that felt really striking and decided to pair it with a high polish foil-blocked pattern across the cover. The end result does something really interesting, acting as a mirror when you hold the finished item in front of you. It seems to act as both welcome and challenge. With this book going out to our schools across the UK, we’re keen to inspire next year’s entrants with the simple question: could you be next? 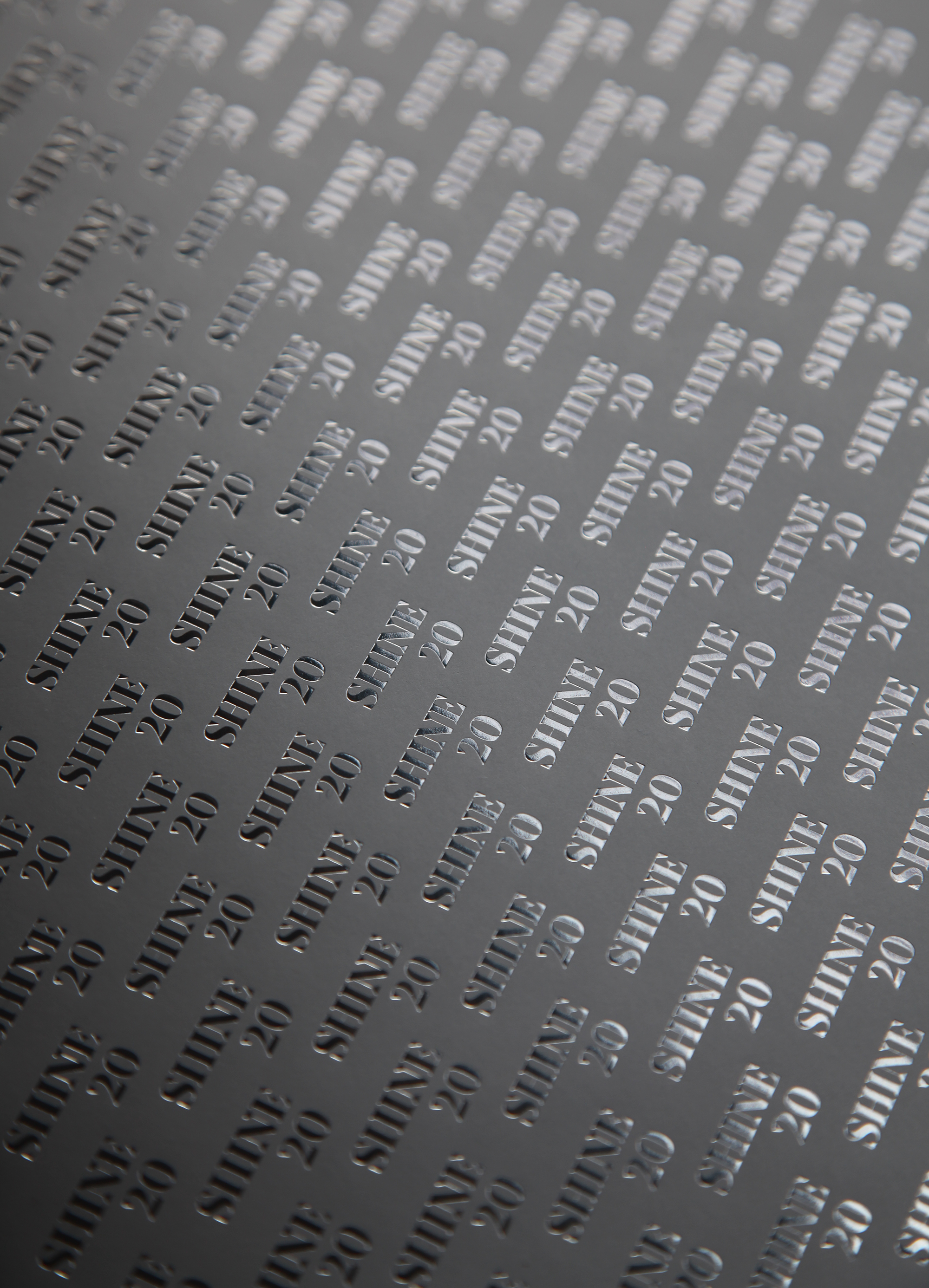 Hire an agency that regularly gets a print award nomination!

We love working with print. Now’s the moment to consider it anew as a great marketing tool. So why not get in touch to discuss a wide range of different approaches? We can work on designs from the simple to the sensational, depending on your brief and budget.