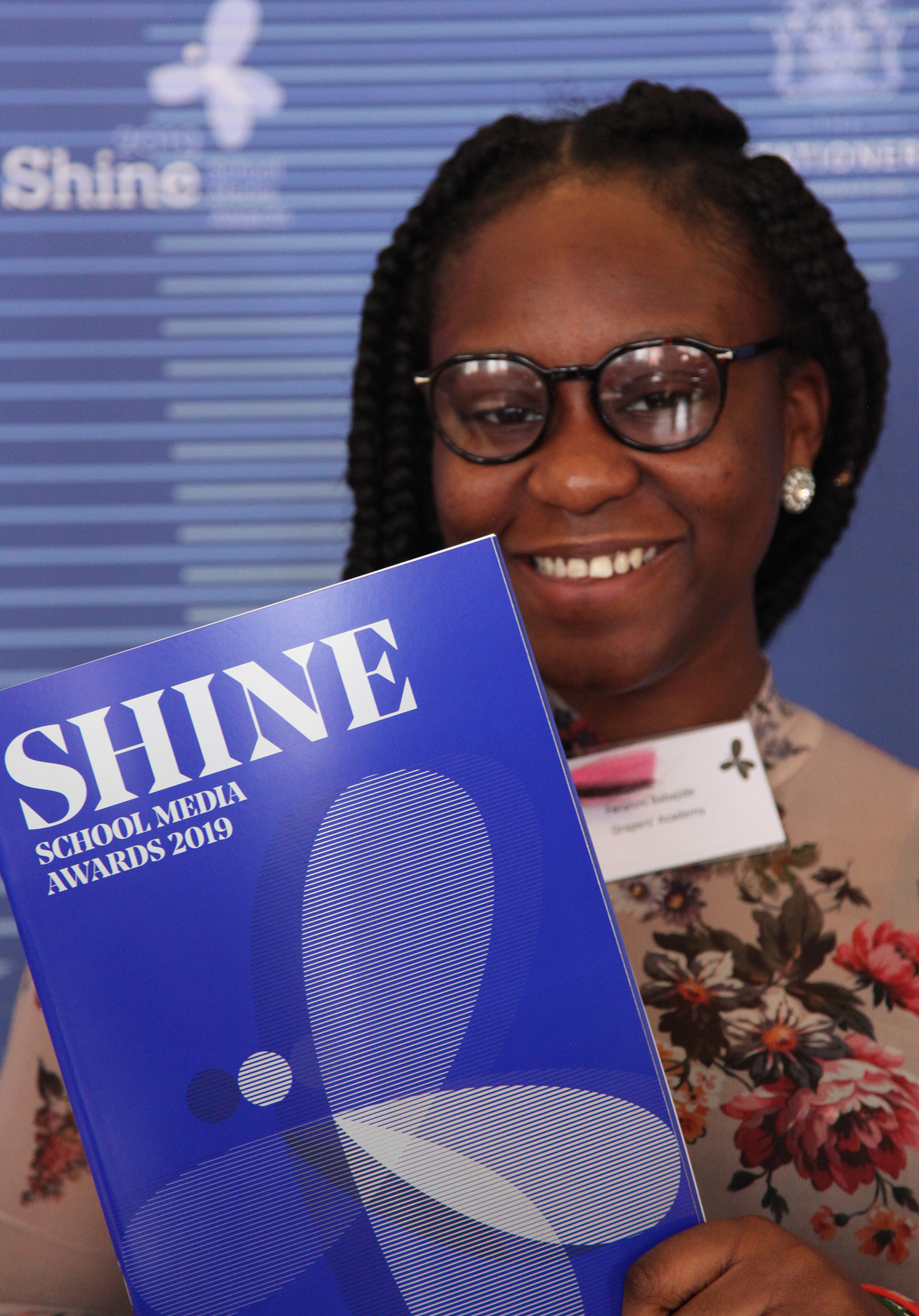 Over the last decade, the Shine School Media Awards has consistently rewarded the UK’s best school magazines or newspapers. In the seven years I’ve been involved with this annual competition, the team behind the project have always worked on incrementally improving every aspect of it, adapting with the times. For instance, latterly we’ve introduced a podcast category and have begun accepting digital publications and highly sophisticated websites. That said, the familiar pattern of the year, leading up to a grand gala ceremony at Stationers’ Hall in the City of London, has never really changed. However, this year, we reinvented it – at a few weeks’ notice. When Stationers Hall closed in April, it was a terrible blow, made even more complicated by schools moving to online learning. We pondered cancellation. However: it turned out that it was much too early to count out our students, whose enthusiasm spurred us on to be radical and hold this year’s ceremony as an online event.

One of my favourite creative projects of the year is designing the longform brochure that every participant receives as they leave the Shine Awards. This ‘winners book’ has expanded each year we’ve designed it – becoming a truly ambitious piece of print. We’ve used special colours, die cutting, embossing, throw-out gatefold pages and any number of beautiful paper stocks. Our aim is always to match the ambition of the students who enter the competition.

Every year of the past six editions I’ve been involved with, the winners book has been provided as sponsorship in kind with paper stock provided by Denmaur Paper Media, then the brochure has been printed and finished by PurePrint. We’re so grateful for their support and are now looking at ways of paying that forward in 2020.

I’ve gone back and found the covers the winners books we’ve completed since 2014 below. I love seeing these collected together… 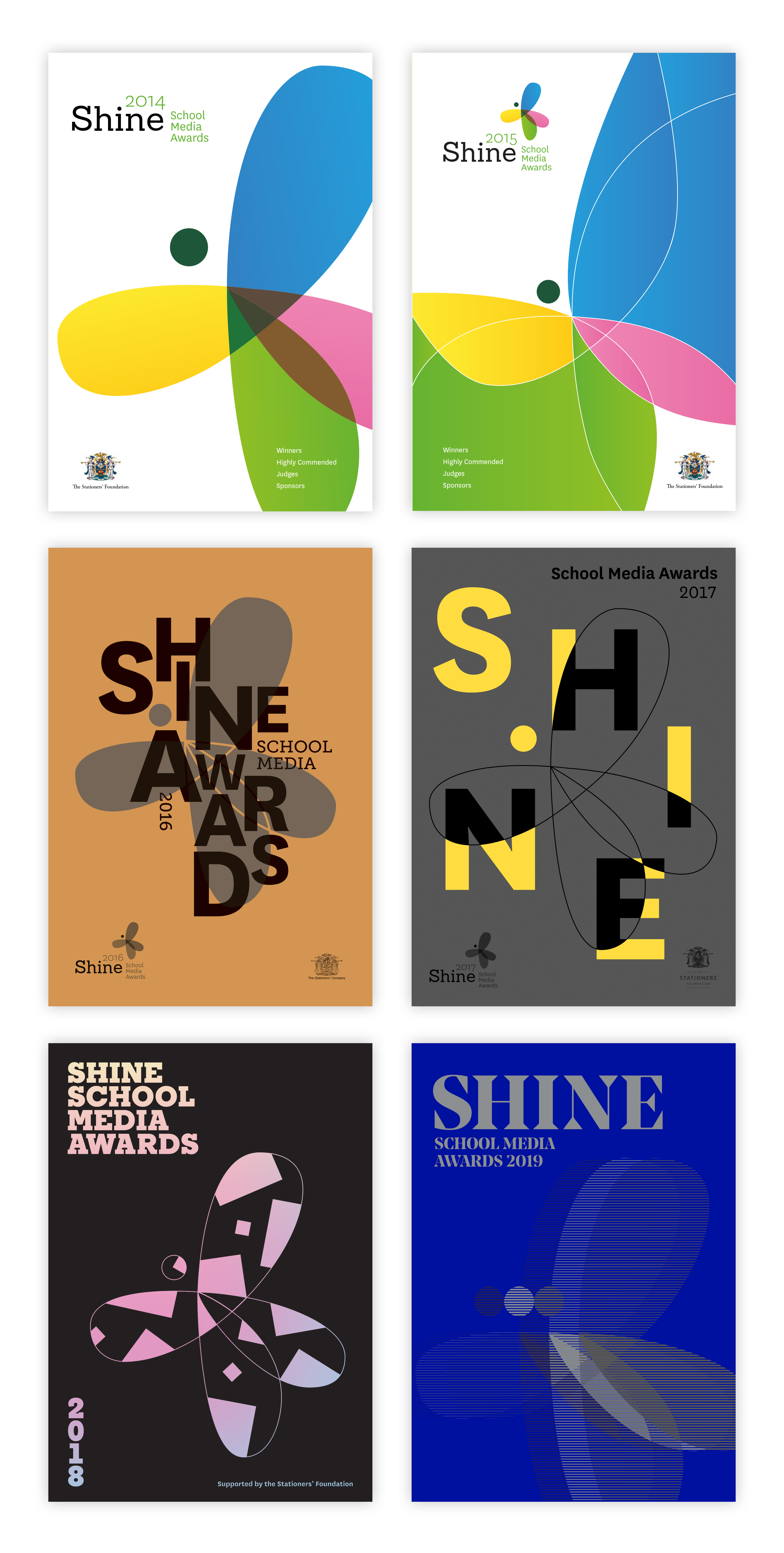 It’s obviously a disappointment that this creative, self-initiated project isn’t possible in 2020. However, the competition has bravely soldiered on – raising the question for us: if we’re holding an online event, surely we could create a special awards microsite? So we’ve applied our creative attention to the Shine website, adding a huge new section which focuses on our winning and highly commended students as well as the sponsors behind each event. Clearly it’s vital that an online event not only includes video but has a full digital backdrop and I think this two-part approach has worked really well.

From a creative perspective, not being able to design the winners book has been tempered by finding a new way to showcase our talented students. We’ll hopefully return to the winners book next year, but given how great the website looks, there’s no way we will abandon a mirrored digital approach.

We’ve also taken this opportunity to sharpen up the Shine Awards logo for its tenth anniversary. Here it is –

PIVOTING TO AN ONLINE EVENT

Back in April at the height of lockdown, all seemed pretty bleak for the Shine competition. It was supposed to be a fantastic tenth year celebration – and that was clearly in serious jeopardy. We hadn’t given up all hope and knew many schools wanted to enter but everything seemed to be against us. Then Stationers’ Hall, our iconic venue and schools themselves closed. We couldn’t imagine exactly in what form the project could even go ahead.

That all changed on my birthday a couple of weeks later. The genesis of an idea began after I had been given tickets to a ‘Zoom Cabaret’. That itself was a fundraiser which the organisers had refused to give up. They had decided that everyone could keep their tickets, give the proceeds to Covid charities – then watch and participate using video. The whole ‘event’ seemed like a dose of much-needed fun – and indeed it was. But more than anything, the persistence and inventiveness of the organisers impressed me and the end result had a loose, enjoyable feel.

I was inspired: why couldn’t Shine run that way?

We quickly agreed that we should. After throwing round a few possibilities, we decided to hold the ceremony as a ‘two hander’ between Alison Strachan, the Chair of Shine at home in Devon and me, from my kitchen table in Fulham. Recorded via Zoom, we then edited in video messages from the committee. The whole thing was masterminded by our longtime editor and supporter, the wonderful Carlo Teofilo in Turin, northern Italy. After a series of rehearsals, it was all recorded and edited in a matter of hours and uploaded to YouTube.

In addition, our ‘winners microsite’ features all the winners, runners-up, judges and sponsors. The end result felt vibrant and wonderful, rather than a compromise.

We had done it, against all the odds.

FIND OUT MORE ABOUT THE SHINE SCHOOL MEDIA AWARDS

Logo, print design, a great digital experience – and now an online event – all wrapped up in one project. If your charity needs help with design, we will always try to work to whatever budget you have to achieve a fantastic outcome. Give me a call on 020 7351 4083 or email direct.

Our work on the Shine School Media Awards

Our work on charities print and web design projects